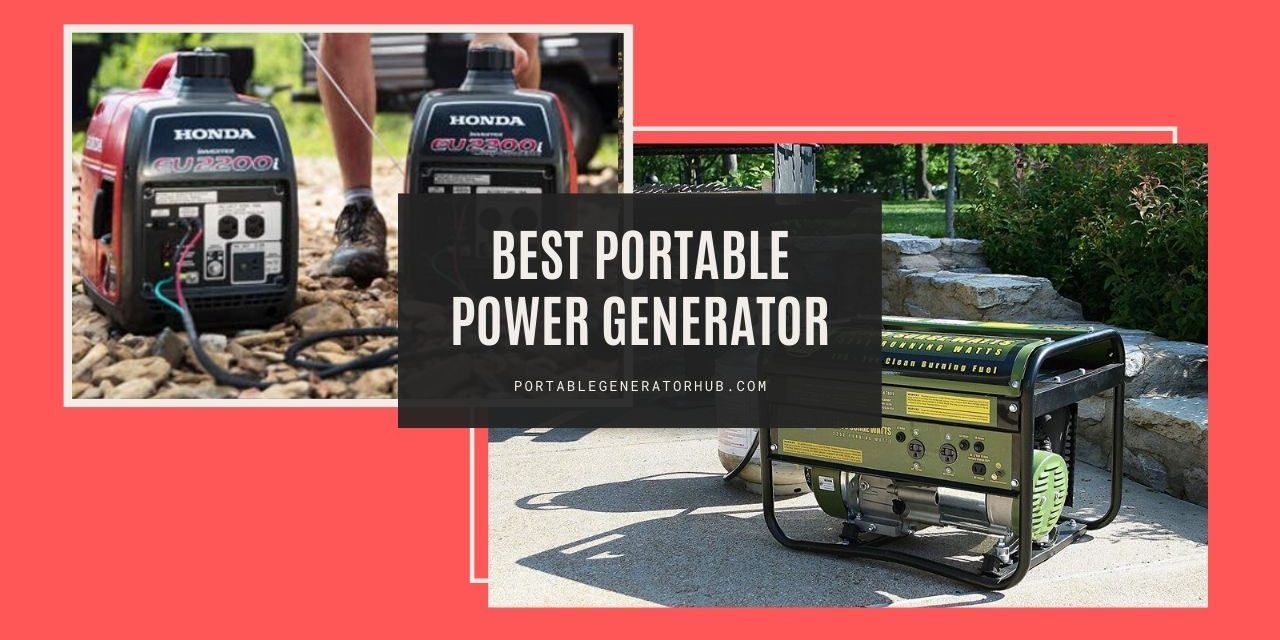 Having a generator at home makes a lot of sense. After all, an average home in the US can experience a power outage every now and then.

These times can be very inconvenient, but you can alleviate the problem with a generator to power your more important appliances at home. But with the best portable power generator, you can get power with your beach outings and campsites.

Since it’s a portable generator, it won’t be a full-sized unit. So don’t expect to power all your home appliances. The good news is that at least you can power the more important ones with the right generator.

Maybe you can power the fridge to keep the food fresh (and the ice cream from melting). You can get the HVAC system working too.

Or perhaps you can get by with the TV and sound system so you don’t get bored at home when the power’s out.

To help you make a quick (yet suitable) choice out of the numerous options, here are some of the best generators that may be small and portable enough for your needs. 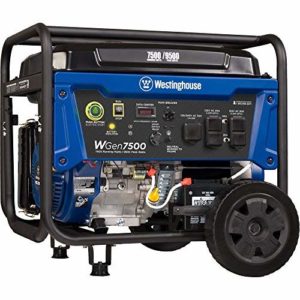 Westinghouse is of course a familiar brand in the power industry, so you’re not getting a generator from some fly-by-night operation.

This particular model gives you ample wattage at 7500 running watts, along with 9500 starting (peak) watts.

That should be more than enough to let you remain comfy during a power outage in the summer or winter. The tank can contain up to 6.6 gallons of gasoline, and that’s enough for about 16 hours of running time.

It’s still a portable model though, although it’s the best portable power generator and best described as a mobile unit.

This comes with the requisite wheels and handle so you can move it from one spot to another. It’s easy enough to use, and it also comes with lots of safety features.

These include rubber covers for the outlets, a digital hour meter, fuel gauge, automatic low oil shutoff, and a durable cast-iron sleeve. This should last a long while, and it comes with a 3-year warranty.
Features: 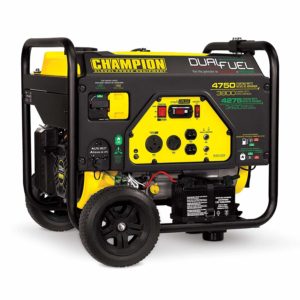 What if you don’t want to use gasoline? With this dual-fuel power generator, you also have the option of using propane gas instead of gasoline if you want.

This gives you 3800 running watts and 4750 starting watts, so it can power a bunch of stuff for camping and outdoor parties.

This dual fuel generator should consider as the best portable power generator on the market.

You can use this overnight too. With a full tank of gasoline, you can get 9 hours of straight use. With propane, it’s even longer at 10.5 hours.

It comes with push-button electric start, and Volt Guard secures all your outlets. This is extremely well-made, which explains the lengthy 3-year warranty. The technical support is also free for a lifetime.
Features: 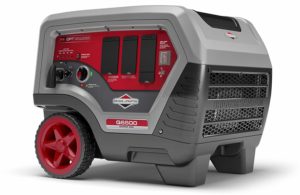 This also offers lots of wattage with 5000 running watts and 6500 starting watts. Its 5-gallon fuel tank should, at 25% load, be able to give you 14 hours of running time.

Aside from the four 120V-20A GFCI outlets and the 120V/240V, 30A Locking outlet, you also have 2 USB ports so you can directly power your smartphones, tablets, and laptops.

This comes with the standard set of features, including a fuel gauge and a power meter. It’s very fuel-efficient as well, and in comparison to tests in fuel efficiency, it performs 30% better.

It’s very well made too, and it has a 24-month warranty for regular consumer use. For commercial use, you still get a 12-month warranty.

What makes this stand out is that it’s extremely quiet. It’s about 60% quieter than standard portable generators. Its “Quiet Power Technology” adjusts the engine speed to minimize the ruckus.

You should also move it farther away from you when you use it, and this should be easy. It’s 30% lighter and 45% more compact than regular portable generators. You also have wheels and a suitcase-style telescoping handle.
Features: 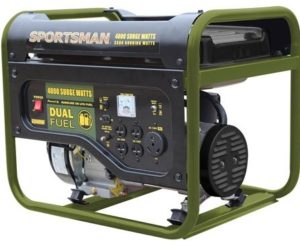 This is another generator that should be able to power your crucial home appliances, while it also powers various devices on your camping trips.

You get 3250 running watts and 4000 starting watts, so even your fancy coffee machine should run outdoors.

It’s powered by propane gas, and on 50% load, it can run for 10 hours. It’s also EPA-approved, so it’s also quiet enough.

You have two 120V AC outlets to work with your generator cords and you get several safety features.  These include circuit protection and automatic shutoff in case of low oil or low fuel.
Features: 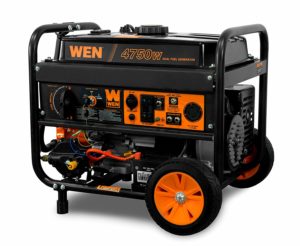 If you want to buy small portable generator then this one can be the best example. It can provide power for essential appliances and devices when you’re outdoors.

This gives you 1600 running watts and 2000 starting watts, and that’s more than enough for camping and beach parties.

If the wattage isn’t enough, you can always connect a second WEN model 56200i to increase the power output.

For many people, this will be mainly used to recharge the ubiquitous smartphones, tablets, and laptops. For that purpose, the power output is extremely stable so as to be safe for these sensitive devices.

There’s also a USB port for them, to go with the two 120V sockets and the 12V DC socket. This comes with a lot of safety features too. These include low oil automatic shutoff, overload protection, and low fuel shutoff.

It’s not very noisy (51 decibels at a quarter load), and the ECO mode adjusts fuel consumption for optimal fuel efficiency.

Carry this to a campsite, and you can have music and recharged smartphones for everyone. It’s designed like a small suitcase, and it only weighs 48 pounds.
Features: 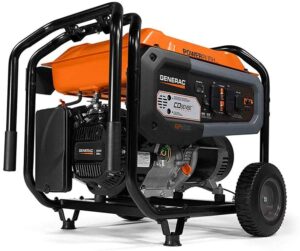 This portable generator gives you 8000 watts and 2000 starting watts, which makes this best for emergencies and for camping trips.

That goes for California residents as well, since this is CARB-compliant. It’s actually designed to look like a bag, so it really is meant to go along with you.

The handle is on top, the design is compact at 2.2 cubic feet, and it doesn’t weigh more than 45 pounds. The power you get is extremely stable, which makes this great for power-sensitive devices.

It will also run up to 10½ hours at 25% load, as its Smart Throttle feature monitors the load and rpm to maximize fuel efficiency.

This has the fortunate bonus of also reducing noise. If you think the power is good for most situations but you think you need extra power for “just in case” scenarios, you can always just get a second EF2000iSv2 generator. They can then be used in a parallel fashion to increase your available wattage.
Features: 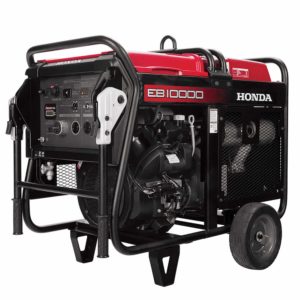 Since Honda is best known for producing fuel-efficient cars, it’s not surprising that their expertise extends to making great engines for generators.

This is one of their no-nonsense models, with 1600 running watts and 2000 starting watts.

It’s a hardy unit that can be run all day as long as you have the fuel. But you don’t have to bring along too much fuel, because it can run more than 8 hours on just a single gallon of gasoline.

You’re going to love this for outings since you get the power you need without the bulk and the weight.

It’s compact and lightweight. What’s more, it’s very quiet too so it won’t disturb your party or your sleep.
Features: 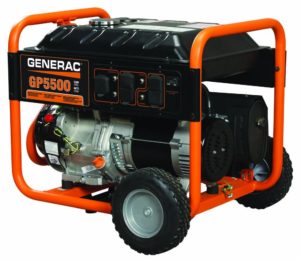 For home use, you may want more watts to really feel comfy even during a power outage. This particular generator should do, as it offers 6875 starting watts and 5500 running watts.

That should be more than enough to run your fridge, AC for summer comfort, and the TV and audio system so you’re not bored. Add your lights as well.

At 50% load, this can also last up to 10 hours on a full tank. The safety features include a circuit breaker, covered outlets, hour meter, and auto low oil shutoff.

You can also move this around with its wheels, while the handle folds down so it doesn’t take up too much space.
Features:

What Size Generator Do You Need to Power a House?

Generators come in various sizes and capacities. While some can power your whole house, others can power only a few appliances. Considering the possibility of a natural disaster occurring, it might be a good idea to back up the power supply to your house, especially if you live in a city or state that is prone to natural disasters like hurricanes and storms.

This is because whenever a natural disaster strikes, power is not spared. However, the size of a generator that is big enough to power a house starts from 3,000 watts. However, this is not applicable to every home because every home has unique power needs.

So, to find out the size and capacity of the generator that suits your needs. Sum up all the appliances you want to power with your generator. Their total wattage will give you an idea of the kind of generator that you need. Don’t just guess a figure. Generally, the least wattage to power a house is 3,000 watts.

What Do You Mean by Power Generator?

In simple terms, a power generator is an appliance that converts mechanical energy to electrical energy and generates it as power. There are two major types of power generators. The first type is the one that runs on fuel to produce power and the second type of generators are the ones that have an in-built battery. The battery can be charged by either a power outlet or by solar panels.

Which Power Generator Is the Best?

Is a Power Generator Worth It?

What’s the Quietest Portable Power Generator on the Market?

Finding a quiet generator is crucial since a gas generator has an engine that can make a lot of noise. If the silent operation is actually your highest priority, then you’re better off with a rechargeable power station that can in turn power your smartphones and laptops, and maybe a few lights and your music system.

That’s more than ample for campsites and beach parties. But the problem with this type of generator is that you don’t have an easy way to power it on location.

Usually, you have to power it at home first and you’re stuck with the available power you have. That’s why it’s great to have a gas generator since you can just refill the tank when you’re running low.

But again, we go back to the noise problem. In itself, the generator is noisy and that’s especially true when you’re using up the full load. The good news is that even among the gas generators there are some comparatively quiet generators.

If you want it quiet, go with fewer watts and look for a built-in muffler. You should also place it far from you, so you don’t have to shout to have a conversation!

How to Test a Voltage Regulator on a Portable Generator?

A portable generator is great only if it’s producing the right voltage. For that, you have a voltage regulator on your generator.

But what if there’s something wrong with it? If your voltage regulator isn’t working right, then it will affect the voltage output of the generator.

If the number is what you’d expect, everything’s fine. If the number you get isn’t right, then there may be something wrong with your automatic voltage regulator. So you’ll have to test this AVR.

Get the best portable generator for power tools and you can bet you’ll have plenty of use for it. Bring it along on the beach or to a tailgate party, and keep it handy at home when there’s a power outage. Buy one now, because you’ll need one eventually. 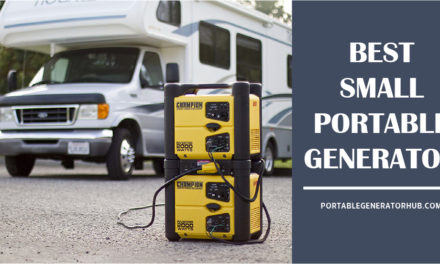 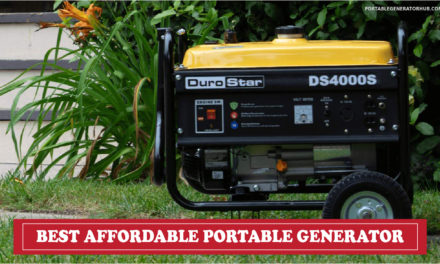 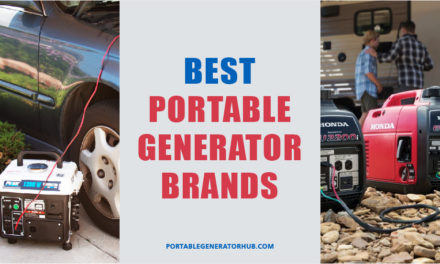 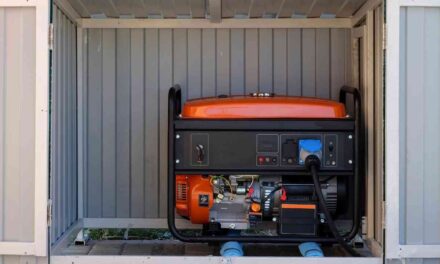 How to Protect Portable Generator from Rain? Easy and Guides