Touch VS. Non-Touch Plasma Cutter – What Are The Differences? 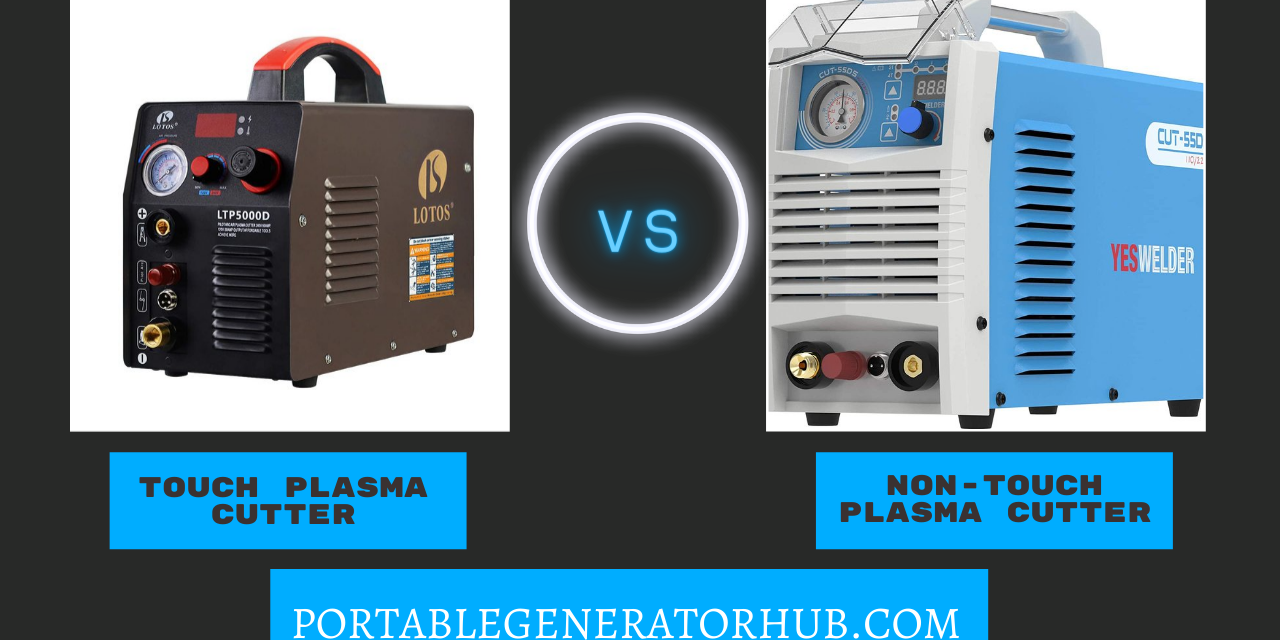 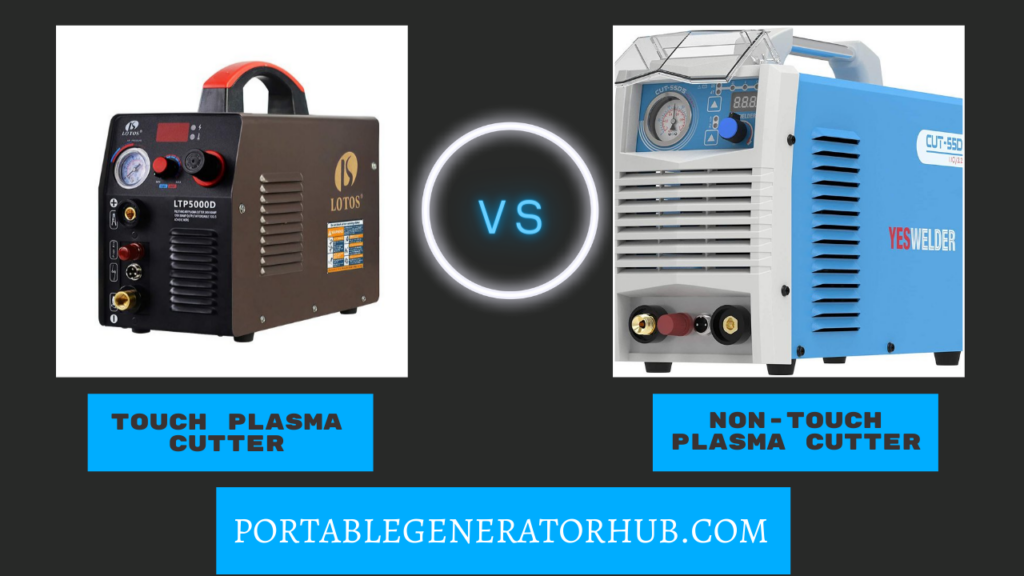 Firstly, what’s plasma cutter all about? Indeed, that’s simple. Plasma cutters generate heat to cut metal by merely using up compressed air. The formation of the plasma comes into the scene when the gases are ionized through heat.

Heat is initiated in the torches by sparks and retained by the voltage from the power supply. All these occur in the plasma torches of Touch vs. Non-Touch Plasma Cutter.

You see, how this single process occurs is different. Meanwhile, it depends on the type of machine that one uses. Plasma cutters are found in two types anyway and you can differentiate them through their torches.

What Is A Touch Plasma Cutter?

The mechanism that jets out plasma from the electrode to the workpiece is controllable by the trigger on the torch. Most of the time, the plasma torch is removable from the plasma machine.

Furthermore, the connector and the trigger on the plasma torch are consumables that one must be mindful of when using a plasma torch.

What Is A Non-Touch Plasma Cutter?

This works by initiating the performances with a pushbutton option. You’ll find no trigger on this, so you’re only bound to make use of the pushbutton only.

Invariably, you’re not literally touching the torch of this plasma cutter directly. Instead, you’re more focused on the result of the plasma cutter as it could work without coming in contact with the workpiece.

This uses the high frequency at a high voltage initiating option to project the gas into becoming the plasma arc. The resultant can cut through the dross and highly thick metals because of the high propelling power that drives the energy on the plasma from the static electrode to the workpiece.

Learn more about the discrepancy of the two below:

At that point in time, no power is suctioning the gas into the torch through any channel (hose). But when it does, as you pull the trigger of the plasma cutter, the pressure from the moving gas separates the nozzle from the electrode.

The negative electrode would then move its energy to the workpiece, forming the positive terminal. Meanwhile, a spark would occur as the electrode leaves the nozzle, which would open the pathway for the plasma arc as the electrode continually relates with the metallic workpiece.

The voltage of the plasma machine draws the gases at a considerable rate. Also, it stabilizes the circuit that occurs from the spark to consistently ionize the gas to constantly eject the plasma jet, which could feed on the workpiece and cut them.

Shielding gas literally keeps you safe and likewise the equipment because when the spark ionizes the gas by heating it in the clumsy channel, the plasma jet comes out at 300,000F.

Meanwhile, that’s another work that nozzles do aside from paving for the ejection of the plasma arc. Non-touch plasma cutters use shielding gas and air filter to make an exquisite output even at a better rate than touch plasma cutters.

Non-touch plasma cutters use the high-frequency option. The plasma gas becomes swirling as it passes through the electrode and nozzle. The unit’s console siphons the compressed gas, and the swirl rings change them to vortex as they go through the nozzle.

Frequently, the arc starting console generates a 5,000V with a direct current to activate the high frequency. Therefore, nothing would impede the inference as long as the power supply is constant and the compressed gas used is perpetually flowing.

Non-touch plasma cutters constitute nuisances. They are preferably used in companies or a place far from human communities. However, this results from the high-frequency mechanism and the swirling rings that augment the plasma gas pressure as it moves from the electrode to the nozzle.

Non-touch plasma cutters make good clean and severance cuts than its comparison. Their respective pilot arc occurs immediately the gas move from the electrode to the workpiece – that’s when you see the blue flame.

Non-touch plasma cutters, on the other hand, keep ionizing the gas as the swirling rings change the plasma gas into a vortex before forcing them through the nozzles. The high frequency and the high voltage will increase the temperature of the gas and ionize it.

Therefore, as long as the button is on-pushed, the ring will continue to swirl and ionize the flowing gases into becoming a pilot arc. The rush and the high intensity make non-touch plasma cutters cut beams perfectly.

They use the same type of gases. Nonetheless, non-touch plasma cutters use blend gases the most at a comfortable climax. You can see the plasma torches in different designs; they are made to suit different tasks.

Some have long torches, while some are not pretty that long. The tip could be ramped away from the handle to enhance achieving precisions at its core.

Meanwhile, that’s opposite touch plasma cutters that have to be at ¼” to the workpiece before it could activate a spark to ionize and generate a circuit that could cut the metal through the plasma jetting.

What Are The Two Types Of Plasma Cutters?

What Does IGBT Mean On A Plasma Cutter?

The acronym stands for Insulated Gate Bipolar Transistor (IGBT). This is often found among professionals that require high efficiencies in their output and provide an eco-friendly service. Nevertheless, it also imbibes the high frequency and high voltage technology for the initiation of plasma cutters.

All these are what differentiate between touch and non-touch plasma cutters. You could decipher by merely reading this and knowing the difference. In fact, you can now tell the difference between the two and know the one that can profit your expertise. 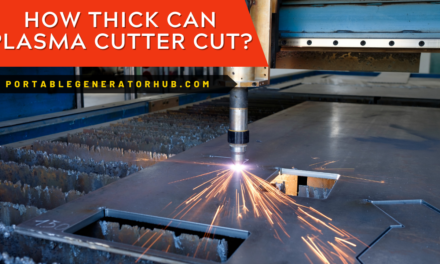 How Thick Can Plasma Cutter Cut? All You Need To Know 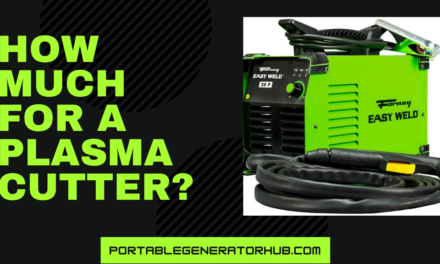 How Much For A Plasma Cutter? Find Out Here 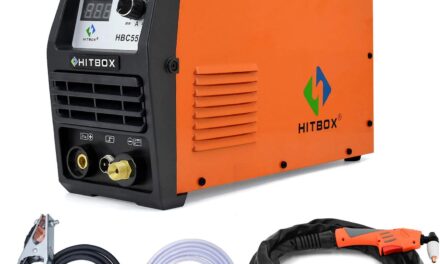 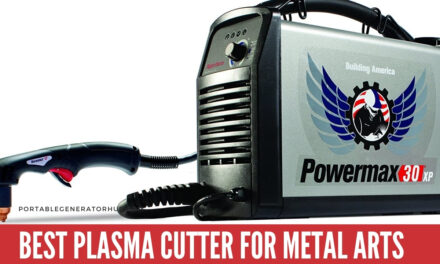