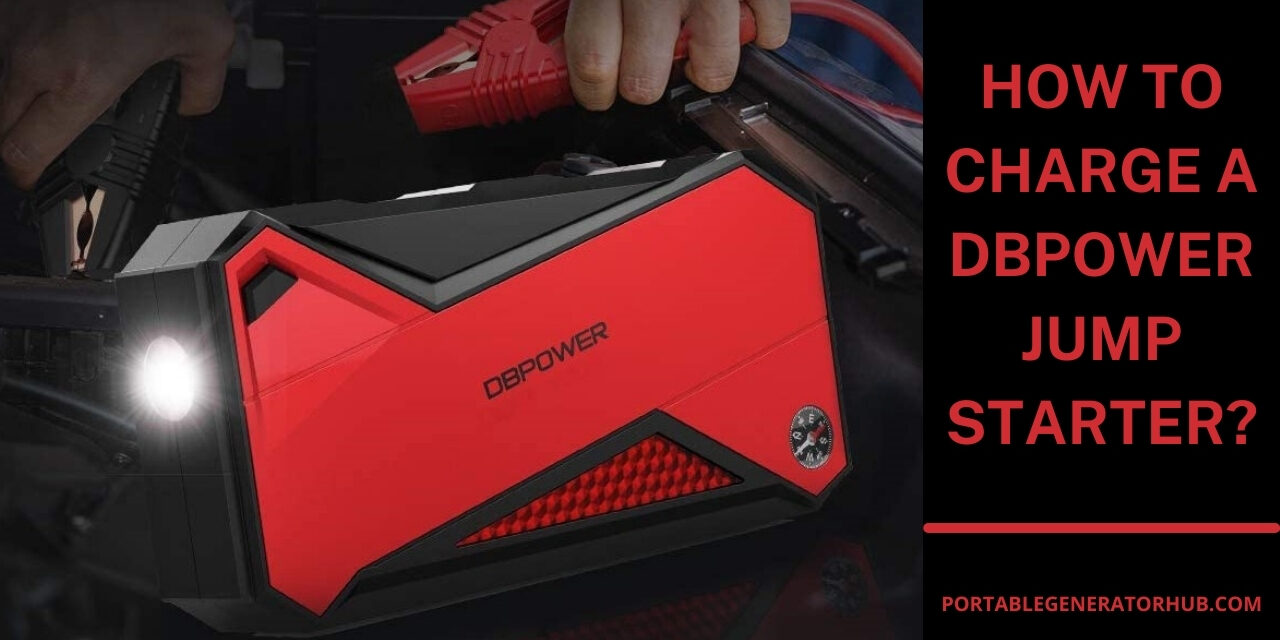 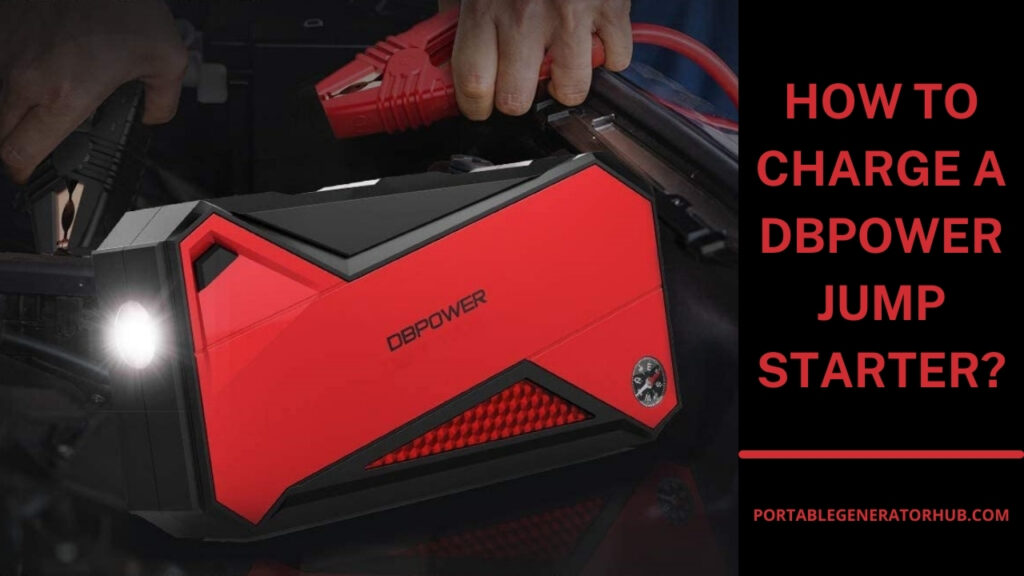 If you’re here because you want to know how to charge a DBPower jump starter, welcome. You’re on the right web page. Ensure you read the article to the end to avoid missing out key points. Due to the importance of a jump starter, there’s a high demand for it

and that’s why there are numerous brands and models of jump starters around. As a policy, we only review the best among them.

This article focuses on the DBPower jump starter. Here are some of its features. The unit comes with a couple of chargers. You can use the normal charger that looks like the charger of your smartphone. Also, it has a cigarette lighter charging cable. This is for charging it in your car.

The unit has two USB ports for charging your phone, tablet, and other smaller devices. You can monitor its battery level on its LCD display screen. The device has light indicators. When it shows a green light, it means the jump starter has enough voltage to jump-start your car. A red light means the battery is too low for jump-starting.

It has a compass. You’ll need that when you go hiking or camping. One feature that we are impressed about is the flashing light. It is a super bright amber light that flashes. You can use it as an emergency light when your car breaks down on the road or when you’re trying to change a flat tire. Other motorists will see you from a far distance.

In addition to the flashing light, it has a white LED light. You can use that as a flashlight. Also, you can make the white light blink like an emergency light too. The jump starter will arrive with 75% battery power, which can jump-start a car, but you need to charge it to 100% before using it for the first time, and it takes about 3 to 4 hours to reach 100% from 75%.

How To Charge A DBPower Jump Starter?

As explained above, the unit comes 75% charged, but you have to charge it to 100% before you use it for the first time. This takes about 3 to 4 hours. If it takes 4 hours to get the jump starter 25% charged, it will take about 12 to 16 to charge it from zero.

The jump starter will continue to jump-start a car until its battery level falls below 50%. Then the red light will come on. This indicates that you should charge it immediately. There are a couple of ways to charge the device. You can charge it directly from your outlet and you can charge it through the cigarette lighter port.

To Charge It Via An Outlet

Step 2 – Connect the charger to the charging port.

Step 3 – Plug the charger head into an outlet.

Step 4 – Switch the outlet on.

To Charge The Device Via The Cigarette Lighter Port

Step 3 – Connect one end of it to the jump starter.

Step 4 – Plug the other end into the cigarette lighter port.

Step 5 – Start your car and it will start charging.

Since you’re meant to charge it after every use, you can plug it into the cigarette lighter port immediately after using it to jump-start your car. Remember, the green light will come on immediately. It will start blinking, but once the battery of the jump starter hits 100%, the light will stop blinking.

At this juncture, it is important to make it clear to you that charging the device through an outlet is much faster than charging it through the cigarette lighter port. So, when you have the opportunity, charge it at home, so you don’t have to charge it in your car.

How Long Does It Take To Charge A DBPower Jump Starter?

Why Is My DBPower Jump Starter Not Charging?

There are several reasons why a DBPower jump starter may stop charging. Let’s start with outlet charging. If you plug it into an outlet and it is not charging, the charger may have packed up or the battery of the jump starter is dead.

Try to find out what the problem is. Charge it through the cigarette lighter port. If it charges through the port, it means the main charger or that particular outlet has a problem. Plug the charger into another outlet. If it works, then you have confirmed that the outlet is faulty. Get an electrician to fix it.

And if it still does not charge after plugging it into another outlet, the battery may have packed up. Change the battery.

On the other hand, if it charges through an outlet but does not charge through a cigarette lighter port, the port or the cable may be faulty. The good news is, the device is durable and will last for several years if you take good care of it and follow all its usage instructions.

How To Use A DBPower Jump Starter?

You just realized that your car wouldn’t start because its battery is weak. No problem, a DBPower jump starter is all you need. Here are the steps involved.

Step 1 – Ensure Your Jump Starter Is More Than 50% Charged

If the device is less than 50% charged, it won’t jump-start your car. You may have to charge it first. In fact, the red light will be on. This tells you that your jump starter will not work.

Step 2 – Open The Hood Of Your Car

The clamps of this jump starter are actually detachable. So, you will need to connect the clamps to the unit before connecting the red clamp to the positive battery terminal.  After that, you can now connect the black clamp to the negative terminal.

Step 4 – Switch On The Jump Starter

Now, you can switch on the jump starter and look for the indicator light. The green light should be on. This is an indication that it will jump-start your car.

Switch off the device and remove the black clamp first. Remove the red one too. Detach the clamps from the unit and close the hood of your car.

Wait for your car to run for about 15 to 20 minutes before you move the car. This will allow the alternator to charge the car. Don’t forget to charge the device when you get back home. It has to be 100% charged all the time.

What Does The DBPower Jump Starter’s Red Light Mean?

When you switch on the jump starter and the red light comes up, it means the battery of the jump starter is low. You have to charge it before using it to jump-start your car. If the red light comes up when you connect its clamps to your car’s battery terminal, it means the connection is inappropriate. You may have connected the clamps to the wrong terminals.

When you’re charging the device and the red light comes up, it means the battery of the jump starter isn’t charging. It may be dead. Replace it.

The jump starter is one of the best because it has the capacity to jump-start cars, SUVs, and trucks. In addition, it has a flashlight, a flashing emergency light, and two USB ports. Most importantly, it is very durable and could last for up to ten years. 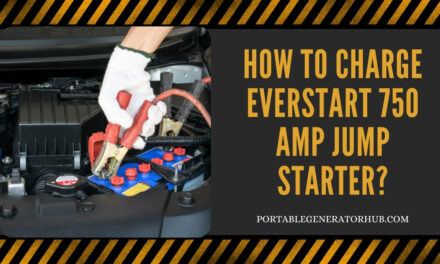 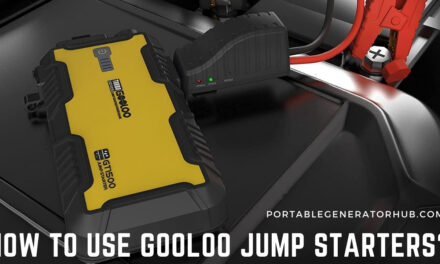 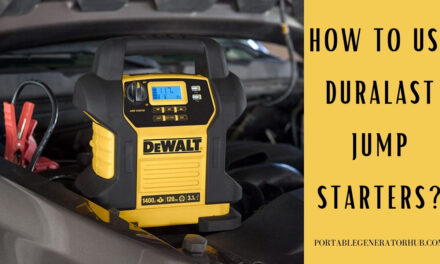 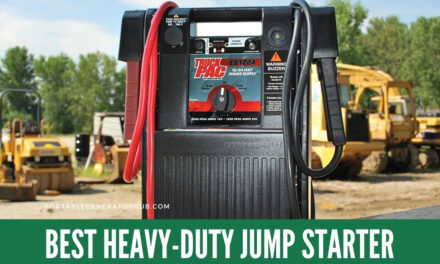